OVERSEAS AGENCY is a hockey agency that was founded in 2016 by Miroslav Barus and Filip Barus. The main mission and priority of OVERSEAS AGENCY is to give young hockey players the opportunity to combine hockey and education, to get to know a foreign country, and to have unforgettable experiences on and off the ice.

OVERSEAS AGENCY is the only agency in EUROPE that specializes in the ‘Spring League’ in Canada. It cooperates with many Canadian coaches and scouts, and it has connections to Canadian clubs. The agency has been offering young hockey players aged 9 to 20 the opportunity to improve their hockey skills since 2011.

But OVERSEAS AGENCY isn’t just the Spring League. Our goal is to prepare young athletes for their careers as well as their life outside of hockey by providing guidelines for developing their skills, mentality and professional growth. We want to improve their craft, skills and human qualities, and increase their values such as a passion for sports and performance.

Thanks to its developing cooperation with Canadian clubs and agents, the agency offers players individual opportunities throughout the year. It also offers comprehensive services that include training, camps and tournaments in the Czech Republic and in various parts of Europe to provide continuity for players after they return from overseas.

The Overseas agency was established in 2016. The players of 2003 set out for the Spring League first. The year was a great success, as they won the Canmore Cup Tournament.

One year later, the players of 2003 set out for Canada again, where they took part in four tournaments. They had the greatest success in Stampede Challenge Cup where they dominated. They also won a bronze medal twice (Spartan Cup and Kamloops Cup), and once they finished in fourth place (Aberta Champions Cup).

In 2018 we took part in the third Spring League, this time with players of 2000 to 2008 (teams 2004 and 2006). The team of 2004 lost the finals of Spartan Challenge Cup and finished second. 2006 players won a silver medal in the Stampede Challenge Cup Tournament. They won a bronze medal in the Spartan Cup.

In the spring of 2019 we built three teams consisting of players of years 2000 to 2008 – 2005, 2006 and 2007. The team of 2007 finished third in the Stampede Challenge Cup. The teams of 2005 and 2006 also participated in the prestigious tournament Western Elite Prospect Showcase. The players of this prestigious series of tournaments in North America and worldwide tested their skills and were carefully measured during combine tests. In difficult matches, they get on ice in front of managers and scouts from WHL.

We were unfortunately unable to attend the Spring League due to Covid. After children’s hockey training was banned in the Czech Republic, we organized camps for children born 2002 to 2010 in various parts of Europe where the measures allowed it, particularly in Seindorf am Ossiacher See and 4x in Swidnica. We also played several friendly matches.

We could not travel to the Spring League because of the Covid pandemic. We organized training camps again, where children born 2002 to 2010 played many matches, specifically in Seindorf am Ossiacher See in Austria and in Sanok. We also participated in tournaments in Budapest and Piešťany.

In 2022, we took 50 children in age range from 2003 to 2011, to a new city, called Cochrane which is located near Calgary. The local environment provided us with a great base for training and matches. We also got to know the surroundings and a new culture. In total, we managed to put together three manchafts that played quality matches with Canadian teams. In addition, we managed to arrange a tour of the Calgary Flames’ home arena – Saddledome, where we had the opportunity to see not only the stadium as such, but also the locker room of the team itself.

They have been with us.. 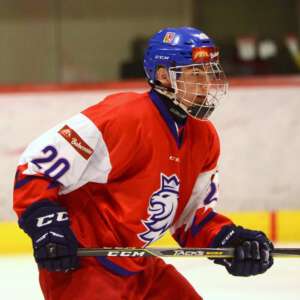